Thank you to Hodder Children’s Books and Netgalley for sending me this arc in exchange for an honest review.

This is the second book in The Contender series and I had been so looking forward to reading it especially after the ending of the first book! I really enjoyed the sequel and I definitely need to know what will happen in the next book like asap!

You can read my review of The Chosen here 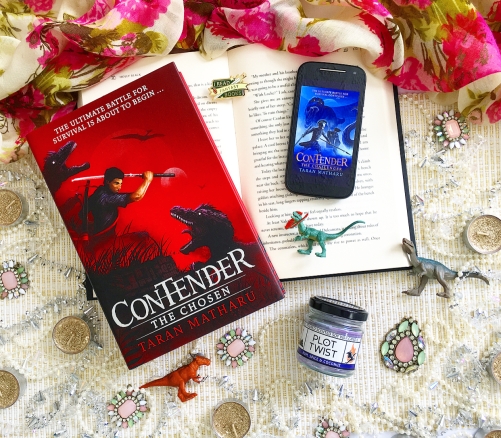 CADE CARTER HAS BEEN CHOSEN

In a realm of monsters and warriors, Cade is an unwilling contender in a deadly tournament controlled by the brutal alien overlord Abaddon.

Cade may have won the first round but the fight isn’t over yet. For his next battle he must duel a seven-foot-tall, clawed monster – the reigning champion of an alien race.

LOSING WILL LEAD TO EARTH’S DESTRUCTION

Desperate for anything that may give him an advantage, Cade sets off on an expedition into the jungle to scavenge weaponry to help him win. But there he is captured by gladiators, and before he knows it he finds himself participating in a deadly new game where the prize is his freedom.

ROUND TWO IS ABOUT TO BEGIN …

This book starts where the first book ends with Cade and the others waiting to see what Abaddon will make them do next and grieving for those who died at the end of the first book. I am still in shock at all the deaths in the first book, I was not expecting that so I started this book already apprehensive and fearing for the lives of the rest of the group.

This book was as intense as the first and it kept me hooked and reading well into the night. I loved how because of what Abaddon told them the second battle will be, they had to travel outside the keep and we got to see more of the world and especially see the type of civilisation that was created through all the people that were sent there from different time periods and different parts of the world. It is steeped in history and I loved it so much!

I loved that the darker parts of the civilisation wasn’t glossed over too, especially how they treated those they enslaved and tortured. It was really dark at times where we see through Cade what could happen to them if they don’t escape after being captured. They go through some brutal battles even before having to face what Abaddon has in store for them. We see more prehistoric creatures which were absolutely terrifying and had my heart racing when Cade and the others had to fight them.

Basically this book completely messed with my emotions and I just could not stop reading because I needed to know what will happen next. As they had to fight as gladiators they had to fight to the death which meant killing other teams. It was interesting to see that as they had to face some people they knew and some they didn’t. Cade and the others struggling to deal with them having to kill or be killed and how it affected them was also so heart breaking to read.

I also loved seeing the friendships develop between them all and how they supported and trusted each other and they were able to rely on each other to survive. I loved seeing friendship theme being so prominent in the story as we really need more of this! There were some small hints of romance but I liked that it wasn’t that prevalent in the books.

The only thing I wish we got a bit more of was ending of the book, there was a lot of build up and I was expecting something a little more? I just felt it happened so quickly that, compared to everything else they went through in the book especially to try to prepare Cade for this battle I would have thought we would spend more time on that part of the story.

I still really loved the book and with the way the book ended I absolutely need the next book asap because I seriously need to know what will happen next!

Thank you to Hodder Children’s Books and Netgalley for this ARC in exchange for an honest review.

Having loved the Summoner books by Taran Matharu I was so excited when he announced his new series The Contender especially as it was set in a world with dinosaurs! And this book did not disappoint! 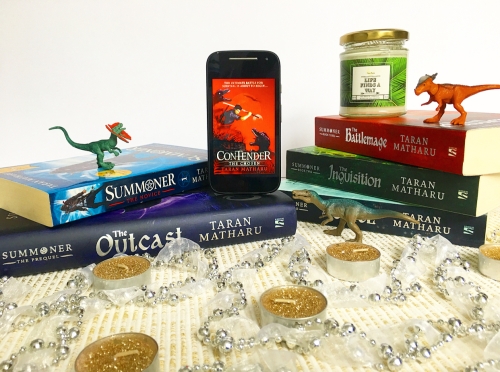 Throughout history, people have vanished with no explanation. A group of teenagers are about to discover why.

Cade is settling into a new boarding school, contemplating his future, when he finds himself transported to another realm. He soon discovers their new world is populated with lost remnants from the past: prehistoric creatures, ancient relics, and stranger still — people. Overwhelmed by his new surroundings, Cade has little time to adjust, for soon he and his fellow classmates are forced to become contenders in a brutal game, controlled by mysterious overlords.

But who are these beings and why did they choose these teens? Cade must prepare for battle . . . because hiding is not an option.

The Chosen opens with Cade already in this alternate world faced with a creature he’s never seen before so right from the beginning we’re thrown into the action. I really liked that as it made me even more intrigued about the story and how Cade ended up there.

We get the backstory of Cade and his classmates throughout the book through Cade so we slowly get an idea of why the characters behave the way they do with each other. It was interesting to see the dynamics between them all and how they had to try and get a long because of the situation they were in. They have conflicts and don’t always agree on things but I wish we had gotten to see more of that in the story.

The story is fast paced and lots happen throughout the book. They have to face dinosaurs and lots of other creatures. I really loved how immersive it was and how he weaved real history and fiction together, the history nerd in me totally loved all mentions of historical facts! The history is actually an important aspect of the story too and one of the reasons that Cade is chosen to be taken to this world.

I really liked Cade and how he thinks before taking action, it’s unusual for a teenage boy to think before he barrels into things so that was nice to see. I really liked seeing the own voices rep as Cade is half Indian and how his culture and family dynamics are. We also see the racism and discrimination he receives from some of the other boys because of it. He is looked down upon because of his lower social class and everyone assumes he is guilt because of how he looks and that he isn’t rich. I liked that he does battle with these emotions and how it makes him feel despite being a top student his opportunities are taken from him. I really hope we get to see more own voices rep in books.

Another character I really liked was Quintus, who Cade meets in this world, he helps Cade and the others and even teaches them how to use some weapons. He has hearing difficulties and we see how he is unable to communicate with others and how that makes him feel isolated and lonely. Cade also meets a group of teenage girls while on this world and they also help him and I loved seeing them flip stereotypes that girls aren’t as capable as boys.

Throughout the whole story we are left to wonder why Cade and the others have been sent to this world. There is a lot of intrigue and mystery and it made me want to read just one more chapter. The ending of the book was so intense and kept me on the edge of my feet. They have to face these terrifying creatures and there are some things that happen that I was not expecting at all which left me reeling. We only get an idea of why Cade has been sent to this world right at the end which of course is then left on a cliffhanger and I just want to know what will happen next!

This book is full of action and intrigue and unlike any other book I’ve read. If you love dinosaurs and history then I highly recommend you pick up The Chosen! I am already dying to know what will happen in the next book!

Recently I took part in the summoner book club on twitter hosted by @teambkmrk and I was lucky enough to win a proof of The Outcast, which is the prequel to the Summoner trilogy by Taran Matharu.

The Outcast is releasing in the UK on May 3rd so you still have time to pre-order the book! Read on for my review!

As I’ve already said I loved this book! It was great to be back in this world and get to see some of the adult characters in the trilogy as teenagers. Like the trilogy the book is fast paced and totally engrossing. I loved the world building, the friendships and the fierce female characters that we get to see.

At the beginning of the story we see the main character Arcturus, who is a commoner, accidently summon a demon and discovering that he is a summoner, which until then is only an ability that nobles have. Because of his ability the king decides to send him Vocans academy to train him as a summoner.

Arcturus is kind and brave and I loved reading this book from his point of view. His demon, Sacharissa is one of my favourite characters! She’s loyal and protective of Arcturus and goes above and beyond to help and protect him. She is absolutely adorable! I loved the relationship between her and Arcturus.

This book deals with the social divide in society where the wealthy (nobles) think they are superior to the commoners. We do get to see that not all nobles are like this and Alice and Elaine are definitely my favourites! Elaine especially is probably one of my favourite characters throughout all the books. I loved how protective Arcturus was over Elaine but we also got to see that she is strong and brave and can take care of herself.

As I said before one of the main themes throughout these books is friendship and The Outcast was no exception. It was the love of their friends that spurred the characters on to keep fighting to not give up. There isn’t much emphasis on couples and I loved that about these books. We see glimpses of it but the platonic friendships are much more emphasised.

There is so much more I want to say! But I want to keep this spoiler free so that is all for now. But if anyone has read these books do comment and let me know what you thought!