Thank you to Puffin Books for sending me this book in exchange for an honest review.

I loved this book so much! Full of amazing Muslims throughout history and all over the world. It was so wonderful to see so many Muslims who often are forgotten and don’t get included in other history books and I loved it so much.

Do you think you know who first thought of the theory of evolution?
Have you ever wondered who created the oldest university in the world?
Is Joan of Arc is the only rebel girl who led an army that you’ve heard of?

If so, then you need this stunningly illustrated treasure trove of iconic and hidden amazing Muslim heroes!
You’ll find people you might know, like Malala Yousafzai, Sir Mo Farah and Muhammad Ali, as well as some you might not, such as:
Hasan Ibn Al-Haytham: the first scientist to prove theories about how light travels, hundreds of years before Isaac Newton.
Sultan Razia: a fearsome female ruler.
G. Willow Wilson: the comic book artist who created the first ever Muslim Marvel character.
Ibtihaj Muhammad: the Olympic and World Champion fencer and the first American to compete in the games wearing a hijab.
Noor Inayat Khan: the Indian Princess who became a British spy during WWII.

There are so many more amazing Muslim men and women who have changed our world, from pirate queens to athletes, to warriors and mathematicians. Who will your next hero be?

This book is the book that I have spent my whole life wishing for. It is full of such incredible Muslims throughout history and all over the world and I just loved seeing them in the book. When I read books about amazing people throughout history Muslims are often not included in these books. I really wanted to see people who looked like me who had a similar culture to me who were also Muslim and this book finally gave me all that and more. It made my heart so full.

We are introduced to so many amazing people throughout history who achieved such amazing things in all areas from sports to maths and science to being activists to being leaders and rulers. I really loved how so many were included that we don’t usually get to see in books.

Some of my favourites were Sayyida al Hurra, Noor Inayat Khan, Khawlah bint Al-Azwar and Zheng He. There were lots of people I had heard of but there were still several I hadn’t heard of and I loved learning about them. It was so fascinating to read and the history nerd in my was squealing with joy!

I highly recommend this book to absolutely everyone. It’s a book that I think is so important for kids today but also anyone of any age will benefit from it.

This book was one of my favourite series growing up, it introduced me to antiheroes and morally grey characters and I fell in love! So when Disney announced they were making the first book into a film I felt it was time to reread. And I loved it as much as I did when I was younger! 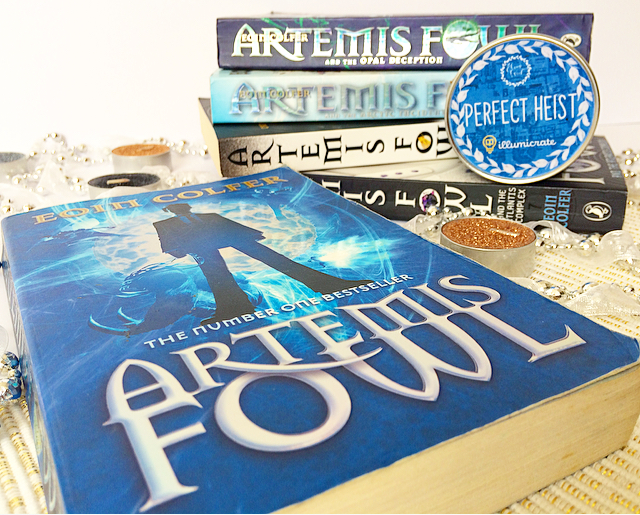 Twelve-year-old Artemis Fowl is a millionaire, a genius—and, above all, a criminal mastermind. But even Artemis doesn’t know what he’s taken on when he kidnaps a fairy, Captain Holly Short of the LEPrecon Unit. These aren’t the fairies of bedtime stories—they’re dangerous! Full of unexpected twists and turns, Artemis Fowl is a riveting, magical adventure.

The story is centred around a 12 year old genius boy who uses his intellect to become a criminal mastermind. He runs his empire under the pretence that he is his father (also a criminal) as he knows that adults will not take him seriously. He also has a loyal bodyguard, Butler, who ensures he stays safe. Artemis is unique in the sense that being 12 years old means he is still young enough to believe in the existence of fairies yet smart enough to uncover the truth about who these fairies really were. And this is when we are introduced to him and the story begins.

This book is so much fun and there is so much sass and sarcastic characters which I loved! The book is fast paced and action packed and I love the way the story is told.

Artemis Fowl is a wonderfully complex character. He may be a criminal mastermind but he’s still a kid and it just makes the whole situation even more amusing. Especially when you see others underestimate him and then the look of shock on their faces when they realise how dangerous he actually is. Yet, he still has a moral conscious and throughout the story you can see that he has to actively push it down to continue with his plans. Even his “evil” plans are for a “good” reason. He is trying to find his dad and for that he needs money. His plans are also so ingenious and complex and it’s so much fun to see them unfold. You think you know what he is planning but then it surprises you!

Butler is the bodyguard and a father figure to Artemis, and you can see that he often points out the moral dilemmas to Artemis and that he would do anything to keep Artemis and his sister, Juliet, safe. There is one spectacular scene of him in battle with a magical creature and honestly, it’s one of my favourite parts!

Holly is the fairy that is kidnapped by Artemis and I just adore her! She is so sarcastic and sassy and I love how she deals with being in a male dominated environment. She doesn’t let others make her feel as though she isn’t worthy of being there and she always does everything to the best of her abilities. I really loved her growing up!

Even the rest of the characters are so great and each one has a distinct personality and are well rounded characters. We get to know each of them quite well even in just the first book.

The main part of the story takes place in about a day so we get to see everything happen by the hour so we actually get a lot of information regarding the way the LEPrecon works and what Artemis has planned. So we really get a sense of the history behind the fairies and humans and why the fairies dislike the humans so much.

Usually it’s pretty clear who the bad guy is and although technically Artemis, being the criminal, would be the bad guy. However I also sympathised with him a lot and was rooting for him. The fairies are also not exactly morally upstanding as they are willing to kill a few humans to achieve their goals.

So despite this being a children’s book, I really loved it as an adult and I think anyone could enjoy it!

I’m really looking forward to continue my reread of this series, especially as a spin off has been announced!