I recently reread ACSDAL during the Curse Readalong hosted by Bloomsbury Publishing and I forgot how much I loved this book! 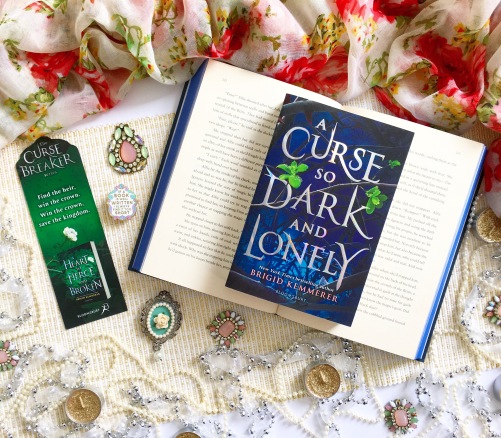 Fall in love, break the curse.

Cursed by a powerful enchantress to repeat the autumn of his eighteenth year, Prince Rhen, the heir of Emberfall, thought he could be saved easily if a girl fell for him. But that was before he turned into a vicious beast hell-bent on destruction. Before he destroyed his castle, his family, and every last shred of hope.

Nothing has ever been easy for Harper. With her father long gone, her mother dying, and her brother constantly underestimating her because of her cerebral palsy, Harper learned to be tough enough to survive. When she tries to save a stranger on the streets of Washington, DC, she’s pulled into a magical world.

Break the curse, save the kingdom.

Harper doesn’t know where she is or what to believe. A prince? A curse? A monster? As she spends time with Rhen in this enchanted land, she begins to understand what’s at stake. And as Rhen realizes Harper is not just another girl to charm, his hope comes flooding back. But powerful forces are standing against Emberfall . . . and it will take more than a broken curse to save Harper, Rhen, and his people from utter ruin.

This book was not what I was expecting, in a good way. I have seen a lot of Beauty and the Beast retellings being released over the last few years and I’ve found them to be quite similar in their storyline which made me hesitant to read this. However this was a totally unique take on the story and I absolutely loved it!

We get both Harper and Rhen’s point of view so it was really interesting to see things from both of their views. Harper is an outsider and doesn’t know much about Emberfall and Rhen is the prince of Emberfall and while he grew up there, he hasn’t been out of his castle for 5 years. Harper reminded him that despite the curse he can still help his people and gave him hope. I really loved seeing that.

I am always surprised to discover that when the world seems darkest, there exists the greatest opportunity for light.

Harper is by far my favourite character, she is brave, determined, resilient and doesn’t let anyone push her around, not even a prince! She has cerebral palsy, which I was surprised to see because we rarely get any disability or long term health conditions rep in books and this rep was really great! She accepts this is a part of her life but doesn’t let it control her life and neither does she allow anyone to just pity her or baby her because she is in pain or walks with a limp. She will always hold a special place in my heart because I have long term health conditions which affect my daily life and I could see myself in Harper.

When we first meet Rhen, he is stubborn and arrogant and impatient. He could be petty at times too and I didn’t particularly like him at first. But he did grow on me as we learn more about him and he grows a lot as a person throughout the story.

The third character was Grey and while we don’t get his point of view, I completely fell in love with him! I actually prefer him to Rhen and shipped him and Harper more. He is Rhen’s guard and absolutely deadly. Yet he is a big softie which we see throughout the story when he interacts with the children. I really hope we see more of him in the second book, especially after that ending and epilogue!

This story doesn’t centre around Harper and Rhen falling in love so Harper can break the curse, it is bigger than that. It’s about saving all of Emberfall and caring for all the people there who have been suffering. It’s about social justice and doing something to help even if you can’t save everyone. It showed me that having a disability doesn’t mean you aren’t capable.

Failure isn’t absolute, just because you couldn’t save everyone doesn’t mean you didn’t save anyone.

I’m really looking forward to reading the next book, I especially hope to see more Grey and more of the world as we don’t really get to explore much we are only told of places and other kingdoms.

PS. If you preorder A Heart so Fierce and Broken which is out in January then you can get some amazing preorder goodies! Check out the link here for more information!