This year was the first time that I had booked tickets to attend YALC for all three days and I was so excited about going and a little nervous as I wasn’t sure I would manage such long days with my health. But my sisters were going to be there with me so at least I wouldn’t be on my own if I needed help. 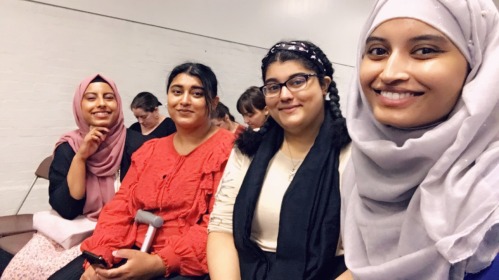 I did mostly enjoy being at YALC, it was amazing to be surrounded by so many bookish people and the atmosphere was awesome! My favourite day was Friday as that’s when the authors I really wanted to see were there and it was the absolute best being able to finally meet them!

But before I talk about my favourite parts I want to talk about the issues that I had with the event.

My main issue was issues with accessibility. I found that there was a lack of seating that was available. There were literally no seats anywhere except the main stage where the panels were. For someone who suffers from chronic pain it made it really difficult for me during the day as sitting on the floor is really difficult for me and the standing for long periods meant that it made my pain really bad, especially carrying books or anything else I picked up during the day. (Even though I did use the cloakroom and have a suitcase to put my books instead of carrying them)

They said they had a chill out zone but again it was literally an empty space where people were sitting on the floor. This combined with the heat and humidity triggered my pain and anxiety. So much so that the pain made it impossible for me to even attend the Sunday which I am really upset about. I hope that there will be more seating available next year as it will really be the deciding factor on whether I can attend or not again and as much as I would love to go I don’t want to trigger my pain to the extent that I can barely get out of bed. It’s just lucky that I had my sisters to help me.

Another thing I want to mention is that some places were first x number of people get the ARC and I felt this was unfair and put those with disabilities at a disadvantage. We cannot stand outside and queue hours before YALC opens or rush to get there to be first. I also felt this could be pretty unsafe as the crowds could cause injury. I know most places did a raffle which I felt was much fairer and accessible to everyone and I hope that everyone will adopt this for next year.

I also wished they were a little more organised with the virtual signing system. It wasn’t clear whether we had to get a ticket for every author before but on the day we found out by chance we needed to get them for each author. We had to repeatedly come and check if we could get in the queue and while I understand that, that is necessary, if we are told to come back three times, after being told every time come back in 10 minutes it does get frustrating. My sister was told to come back at a certain time for an authors signing but when she came back at that time (which she was told by staff to do) the author had finished signing and left so she actually missed out on meeting the author she was most excited to meet.

Another part of diversity that I want to add is the lack of promotion or anything really, geared towards boys. I spent ages looking for something there that would interest my husband that I could say that he would enjoy if he came but there wasn’t much. Although I do have to say that this isn’t solely an issue at YALC but in general, book events are marketed towards girls.

Okay so I know I’ve gone on about the issues I had with being at YALC and I will probably not go again for all three days unless the seating issue is dealt with appropriately. But I will be posting another blog post about my highlights tomorrow!

Did any of you experience any difficulties of being there?