I saw this book on social media and the cover was so pretty so I was instantly drawn to the book and I just had to read it! I really loved the book and read it over two evenings because I just couldn’t put it down! 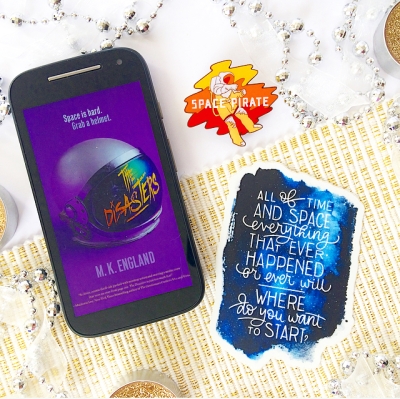 Hotshot pilot Nax Hall has a history of making poor life choices. So it’s not exactly a surprise when he’s kicked out of the elite Ellis Station Academy in less than twenty-four hours.

But Nax’s one-way trip back to Earth is cut short when a terrorist group attacks the Academy. Nax and three other washouts escape—barely—but they’re also the sole witnesses to the biggest crime in the history of space colonization. And the perfect scapegoats.

On the run and framed for atrocities they didn’t commit, Nax and his fellow failures execute a dangerous heist to spread the truth about what happened at the Academy.

They may not be “Academy material,” and they may not get along, but they’re the only ones left to step up and fight.

This book surprised me but in a good way! I honestly had no idea what to expect going into it but I loved it so much! What I was most surprised about was that there was Muslim characters! Nax, the main character is a Muslim and Pakistani. Another main character, Asra is also Muslim and Bengali. Can I just say how much I loved the Muslim rep! I also adored the way Pakistani and Bengali culture was incorporated into the story without it seeming like it was forced. Mentions of women in salwar kameez and that there’s halal food places and that shops close at prayer times. I loved it!

Nax calls his mum, ammi and talks about Eid and speaking Pashto. Asra wears a hijab! Seeing a hijabi in a science fiction book made me so happy! The adhaan (call to prayer) is mentioned and Asra prays her five daily prayers and it was incorporated so well into the story! I loved her mention how it’s difficult to figure out prayer times in space. It made me giggle and then spend several minutes trying to figure out how exactly that would work!

“Asra snorts. ‘Try figuring out how to pray at the right times. Fortunately, there’s an app for that.’”

It was so nice seeing a Muslim wearing a hijab character praying like it’s just part of her normal routine and a part of her life but that it doesn’t define her. I also loved that Nax may not pray but it doesn’t mean Asra looks down on him or vice versa. They get along really well and it was so refreshing to see that. I’m sick of seeing Muslims who pray portrayed as condescending and judgemental.

There is also really great mental health rep in the book. Case and Nax both have anxiety and it does affect them. Even in vital moments when they are under pressure, they suffer from panic attacks. Which made it more realistic for me. That they are affected by it and they know it does, they don’t try to hide it but that they don’t allow it to define them. I also loved how supportive the other characters were when they had a panic attack. There is also LGBT rep in this book and I thought it was done well. Nax is bisexual and Zee is transgender. There’s some discussion about the discrimination that Zee faces and I really liked that Nax was supportive.

Okay so I know I spent ages talking about the great rep that was in the book but I don’t often get to see good Muslim/South Asian rep in science fiction books. I wish there was more!

The story is such a fun read despite the darker themes in the book. It’s action packed and a really fast paced read. It kept me reading well into the night because I just wanted to read one more chapter. We are told the story from Nax’s point of view and I do wish we could have seen the other characters point of view too. I think it would have helped to develop the other characters too.

I really loved that all three female characters were smart and independent. Asra is a genius hacker, Zee is a great medic and actual badass and Case is, well an all round genius. Asra and Zee were my favourite characters and I wish we got to see more of them. I loved how much they all grew throughout the story and how each of the five characters grew closer together and learned to work with each other despite their differences.

If you enjoy fun sci-fi books with lots of action then I definitely recommend this book!

6 thoughts on “The Disasters by M.K. England – Book Review”