Thank you to Orion Publishing Group for sending me this via netgalley. All opinions are my own.

I was so excited to read this book as I kept hearing about it on social media but I sort of felt underwhelmed. It had some really great parts but I just didn’t love it like I thought I would. 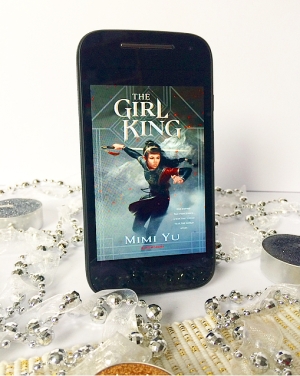 Here is the synopsis from Goodreads:

Sisters Lu and Min have always understood their places as princesses of the Empire. Lu knows she is destined to become the dynasty’s first female ruler, while Min is resigned to a life in her shadow. Then their father declares their male cousin Set the heir instead – a betrayal that sends the sisters down two very different paths.

Determined to reclaim her birthright, Lu goes on the run. She needs an ally – and an army – if she is to succeed. Her quest leads her to Nokhai, the last surviving wolf shapeshifter. Nok wants to keep his identity secret, but finds himself forced into an uneasy alliance with the girl whose family killed everyone he ever loved . . .

Alone in the volatile court, Min’s hidden power awakens – a forbidden, deadly magic that could secure Set’s reign . . . or allow Min to claim the throne herself. But there can only be one Emperor, and the sisters’ greatest enemy could turn out to be each other.

When I started reading the book I felt it was really slow and actually took me a while to get through the first half of the book but then it was a lot more fast paced near the end.
I think that my favourite part was the characters themselves, Lu and Min are sisters but are very different from each other. Lu is older brave, strong and smart. She is someone who holds onto her ideals no matter what life throws her way and knows that what her father did was unjust to Nok and his people. I also liked that she had to face her privilege as a princess and being sheltered from a lot of hardships that others her age have to go through.

Min on the other hand is quite naïve and coddled by her mother and I actually didn’t like her at all. She is spiteful, jealous and petty and has a weird skewed view on what a woman should be like. I was rolling my eyes at her all the time. Though as the story progresses she does go through some changes and discovers she has a magical power which made her more interesting and I do want to know more about what she will be capable of doing.

Lu and Nok travel together for majority of the book while Lu is in search of an army to take on Set and take back her throne and initially I really enjoyed their interactions and how they slowly developed a friendship despite having reasons to hate each other. The romance however felt underdeveloped and unnecessary. I felt they would have been better as friends and allies.

The main issue I had with the book was the plot, I felt that it dragged for majority of the book and I actually got bored. Only the ending felt more fast paced but then it felt rushed like everything happened at once.

Overall this book just wasn’t for me. I really wanted to love it especially as when I saw the title I fell in love but it just didn’t live up to expectations. But I do think that a lot of others will love this.

5 thoughts on “The Girl King by Mimi Yu – Book Review”