I read this book a month ago and I still think about it. It was such an amazing story of love and loss and how everything can change in the blink of an eye. I highly recommend reading this book! 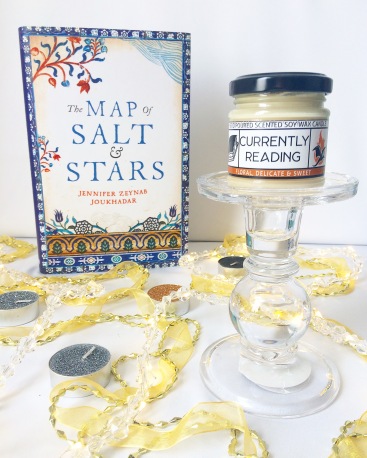 For anyone who hasn’t heard of the book here is the synopsis from Goodreads:

This rich, moving, and lyrical debut novel is to Syria what The Kite Runner was to Afghanistan; the story of two girls living eight hundred years apart—a modern-day Syrian refugee seeking safety and a medieval adventurer apprenticed to a legendary mapmaker—places today’s headlines in the sweep of history, where the pain of exile and the triumph of courage echo again and again.

It is the summer of 2011, and Nour has just lost her father to cancer. Her mother, a cartographer who creates unusual, hand-painted maps, decides to move Nour and her sisters from New York City back to Syria to be closer to their family. But the country Nour’s mother once knew is changing, and it isn’t long before protests and shelling threaten their quiet Homs neighborhood. When a shell destroys Nour’s house and almost takes her life, she and her family are forced to choose: stay and risk more violence or flee as refugees across seven countries of the Middle East and North Africa in search of safety. As their journey becomes more and more challenging, Nour’s idea of home becomes a dream she struggles to remember and a hope she cannot live without.

More than eight hundred years earlier, Rawiya, sixteen and a widow’s daughter, knows she must do something to help her impoverished mother. Restless and longing to see the world, she leaves home to seek her fortune. Disguising herself as a boy named Rami, she becomes an apprentice to al-Idrisi, who has been commissioned by King Roger II of Sicily to create a map of the world. In his employ, Rawiya embarks on an epic journey across the Middle East and the north of Africa where she encounters ferocious mythical beasts, epic battles, and real historical figures.

A deep immersion into the richly varied cultures of the Middle East and North Africa, The Map of Salt and Stars follows the journeys of Nour and Rawiya as they travel along identical paths across the region eight hundred years apart, braving the unknown beside their companions as they are pulled by the promise of reaching home at last.

This is a beautifully written, poignant story. And it is so relevant to what is happening with the refugee crisis around the world. I heard about this book a while ago and had eagerly been awaiting it’s release and it did not disappoint. I must warn you though, have tissues ready, I was teary eyed throughout the book.

“Things change too much. We’ve always got to fix the maps, repaint the borders of ourselves.”

The story begins with Nour just after her father’s funeral and then her family decide to move back to Syria where she struggles to adjust as she doesn’t understand Arabic as much as the rest of the family. This is where we first hear of Rawiya. It is the story her father told her of the young woman Rawiya who became an apprentice to the world’s greatest mapmaker.

Nour has synaesthesia so the descriptions are so vivid and refreshing as she links what she sees and hears to colours. It’s the first time I have read a character with synaesthesia so I really loved seeing that. Each of Nour’s interactions and the people she meets along her journey as her and her family try to get to safety leave a lasting impression on her. Her story felt so real as if I was also travelling with her which made it even more heart wrenching. She goes through so many hardships but there is still hope among her family that they will make it to safety.

Rawiya’s story contrasted Nour’s in the sense that we see Syria when it was flourishing and when people lived in relative safety. Rawiya is smart and brave and kind and I really loved her and her story.

Another thing I loved was the way there was poetry included in the story. As Nour and Rawiya travelled from country to country the story is separated with a poem written in the shape of the country. The poems were not only beautiful and heartfelt but looked amazing too.

“People make such beautiful things, I think, even though they destroy so much.”

As I mentioned earlier this is the story of Nour essentially becoming a refugee and fleeing for her life. Her whole life is uprooted in one moment, their home destroyed and they literally leave with only what they can carry. This is the reality of many all over the world, who one day are living their normal lives and the next running for their life with only what they can carry.

I love that despite everything that happens to them they never give up even though they do sometimes doubt that they will make it to safety. Their strength is inspiring and it really made me feel for not only them but also for all the refugees across the world who are going through this.

“You choose what defines you. Being a refugee doesn’t have to.”

This is a book that I think everyone should read as it is a beautifully written, lyrical story and so, so relevant today. It kept me hooked throughout the book and it’s a book that will stay with you for a long time.

#flholiday6
#flholiday5
“Ali…I thought I made very clear to you I never intended to let you out of my debt.”
Thank you to @electricmonkeybooks for sending me this beautiful arc box of the Twin Crowns by @kwebberwanders and @cat_doyle0
#flholiday3
#flholiday2