I picked this ARC up at the Northern YA Lit Festival and I am so happy that I got this! I really loved this book and I loved that there was emphasis on STEM and that the main character, Lacey, was unashamedly nerdy! 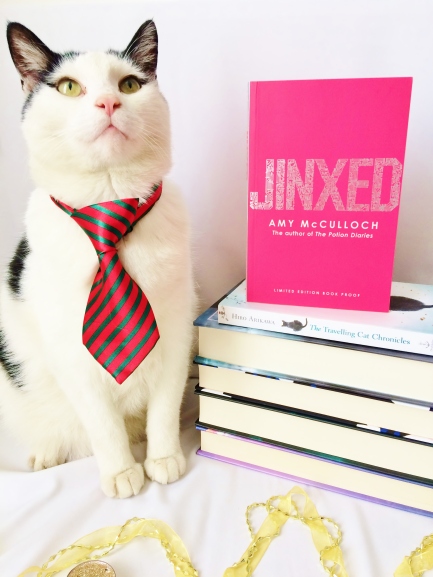 So if you don’t know what the book is about here is the synopsis from goodreads:

Lacey Chu has big dreams of becoming a companioneer for MONCHA, the largest tech firm in North America and the company behind the “baku” – a customisable smart pet that functions as a phone but makes the perfect companion too. When Lacey finds out she hasn’t been accepted into Profectus – the elite academy for cutting edge tech – it seems her dreams are over. Worst of all, rather than getting to choose one of the advanced bakus, she’s stuck with a rubbish insect one.

Then, one night, Lacey comes across the remains of an advanced baku. Once it might’ve been in the shape of a cat but it’s now mangled and broken, no sign of electronic life behind its eyes. Days of work later and the baku opens its eyes. Lacey calls him Jinx – and Jinx opens up a world for her that she never even knew existed, including entry to the hallowed halls of Profecus. Slowly but surely, Jinx becomes more than just a baku to Lacey – he becomes her perfect companion. But what is Jinx, really? His abilities far surpass anything written into his code or built into his motherboard. He seems to be more than just a robotic pet. He seems … real.

So I wasn’t sure what to expect but it sounded really interesting and there was a mention of a cat so of course I had to read it (crazy cat lady here!). And I’m so glad I did as I loved it!

It’s a sci-fi book but it’s actually pretty close to real life that you can really believe the world it’s set in. I loved the way that STEM is a huge part of the book from Lacey wanting to be a companioneer, which is basically someone who comes up with the technological advances of the bakus, to Zora and her insane coding abilities!

This book although had some romance wasn’t a huge part of the book which I loved. There was more about friendships and everyone focused on building their career in their fields. The friendships was one of my favourite parts of the book. From Lacey and Zora’s friendship to Lacey and Jinx’s friendship and of course Lacey and her team mates in school. It showed several different types from old, solid friends to building new friends.

Zora and Lacey’s friendship is amazing because it was so relatable and realistic. They become friends through a shared love of wanting to work in similar career fields. This builds into the amazing friendship that they have.

One of my favourite quotes in the book is also about friendship:

Friendship is about choice. Not obligation.

Jinx was one of my favourite characters in the book with his witty, sarcastic remarks. He is sassy and snarky and forever getting Lacey in trouble. And I loved that Lacey never gives up on him and that he tries to help and protect Lacey. By the end of the book even I felt really protective over Jinx and I wish I could have him as my baku!

This book also dealt with how some people are privileged and that not having it puts you at a disadvantage. Lacey has to deal with the fact that although she has gone above and beyond all the requirements to get into Profectus Academy she is still rejected. But she didn’t give up and she worked hard to get to where she is despite the disappointment and resentment she feels.

This book kept me on my feet from the beginning and kept me wanting to read more, just one more chapter, which resulted in me staying up half the night to finish the book. Everything that happened felt like it was building up to something big and I just needed to know!

The ending left me shocked and I really hope that there is a sequel because I need to be back in this world and know what will happen after that ending!

If you have read this book then let me know what you thought!

Please note that all quotes from the ARC are subject to change in the final book.

#flholiday6
#flholiday5
“Ali…I thought I made very clear to you I never intended to let you out of my debt.”
Thank you to @electricmonkeybooks for sending me this beautiful arc box of the Twin Crowns by @kwebberwanders and @cat_doyle0
#flholiday3
#flholiday2