This book was one of my most anticipated releases this year and let me tell you, it did not disappoint! I loved this book so much and it’s probably one of my favourite reads this year!

If you haven’t heard of or read this book then you really need to go buy it and read it! Trust me you won’t be disappointed! 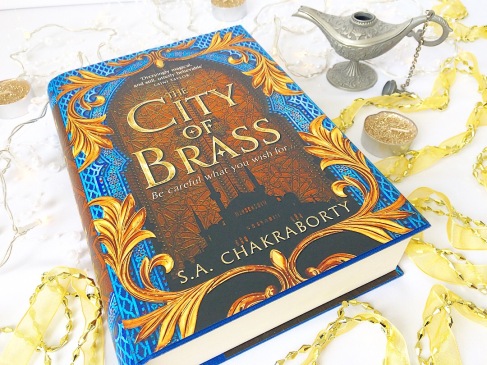 The City of Brass by S.A. Chakraborty is an adult fantasy set in 18th century Cairo. And this was enough to make me want to read it! Then the cover was revealed and I fell in love!

This is the synopsis from Goodreads:

Nahri has never believed in magic. Certainly, she has power; on the streets of 18th century Cairo, she’s a con woman of unsurpassed talent. But she knows better than anyone that the trade she uses to get by—palm readings, zars, healings—are all tricks, sleights of hand, learned skills; a means to the delightful end of swindling Ottoman nobles.

But when Nahri accidentally summons an equally sly, darkly mysterious djinn warrior to her side during one of her cons, she’s forced to accept that the magical world she thought only existed in childhood stories is real. For the warrior tells her a new tale: across hot, windswept sands teeming with creatures of fire, and rivers where the mythical marid sleep; past ruins of once-magnificent human metropolises, and mountains where the circling hawks are not what they seem, lies Daevabad, the legendary city of brass, a city to which Nahri is irrevocably bound.

In that city, behind gilded brass walls laced with enchantments, behind the six gates of the six djinn tribes, old resentments are simmering. And when Nahri decides to enter this world, she learns that true power is fierce and brutal. That magic cannot shield her from the dangerous web of court politics. That even the cleverest of schemes can have deadly consequences.

After all, there is a reason they say be careful what you wish for…

The City of Brass is a book that had me hooked from the first page! I read the first page and literally squealed because the main character, Nahri, was wearing an abaya and I finally got to see a character dressed like me! So after that I had really high expectations and I loved the references to middle eastern culture and Islam. It was wonderfully woven into the story.

The story is told from two different points of view. Nahri, who grew up in the human world and was a con artist and worked as a healer and as someone who exorcised djinns from humans. She doesn’t really believe in any of this but one day she accidently releases a real djinn called Dara. And this is where her adventure begins and leads her to the world on djinns. She travels to the City of Brass (Daevabad) with Dara which is where the djinns live.

The second point of view is told from Ali who is a Qahtani Prince. His story starts with him being shown a world within his city of the lesser class. He is shown the injustices done to them just for being born a shafit and not a pureblood djinn. This is where his story progresses and he has to battle between his loyalty to his father (and king) and doing what is right and just.

I adored both their characters! Nahri is such a badass and definitely capable of taking care of herself. She has great character development from the selfish girl who puts herself first to someone who puts a whole tribe first by the end of the book. I loved that she wasn’t perfect or able to develop her abilities easily, instead she struggles with using her powers which made her so much more relatable and a much more interesting character.

Ali is a cinnamon roll and I will not be able to deal with anything happening to him in the next book! He is someone who wants to help the lesser class of people in the city but to do so would be to betray his family and risk being killed as a traitor. His conflict happens throughout most of the book and although I loved him I just wish he would have acted a bit more on doing what is right. Though I did feel for him as other people on both sides put him in difficult positions.

Dara who was another main character, although we don’t see his point of view, we still learn about his history through both Nahri and Ali and at first I found him really interesting but as the story progressed I found him less likeable and I am not actually sure where I stand with him though I am interested to see where his story will go in the next book.

One of my favourite parts of this book was the incredible world building! I loved this world so much and felt totally immersed in this world. The backstory and the politics of why the city is the way it is was so intricately and well done. It made me feel for both sides and it was hard to see who was truly at fault and who was telling the whole truth. I also loved seeing the rich culture of 18th century Egypt and it was such a different setting from the usual fantasy settings in fantasy books.

This story despite having some tropes we are familiar with the story was still unique and original and I cannot wait to continue with this story! There was so many plot twists and some I did not see coming at all! The ending especially left me dying and just wanting the next book straight away! And then the epilogue left me wanting more!

This book was enchanting and I was drawn in from the very first page and this book left me wanting more! There are amazing characters, a wonderfully complex and interesting story and such incredible world building. If you haven’t been able to tell already I adored this book from the story to the cover to characters. And I am so excited to see where the story will go next, especially with that epilogue!

You should all go read this book! You will not be disappointed!

20 thoughts on “The City of Brass Book Review”

Happy release day to The Archer at Dawn by @swatiteerdhala . . This is the sequel to The Tiger at Midnight and I love this series so much! It’s a wonderful story immersed in Indian culture and mythology and has such great characters! . I highly recommend reading it! . . PS my review will be up on my blog in a few days as part of the @theffbc blog tour for The Archer at Dawn! . . . . . . . . #thetigeratmidnight #thearcheratdawn #swatiteerdhala #fantasticflyingbookclub #ffbc #diversebooks #diversereads #diverseauthors #yabooks #yabookstagram #yareads #lovereading #bibliophilelife #bibliophiles #bookishmerch #bloggersofinstagram #bloggerslife #blogtour #bookrecommendations #bookreviews #diversebookbloggers #readingislife #booksaremagic #beautifulbooks #prettybooks #foreverreading #youngadultfantasy #youngadultfiction #readmorebooks #booksbooksbooks
What books were you looking forward to releasing soon but have been pushed back? . . Because of everything happening atm lots of books have been pushed back and while I absolutely understand why, the wait for them is killing me! . . One that has been pushed back but I was lucky enough to read an arc of is The Challenger by @taranmatharuauthor . . This is book two in his Contender trilogy and there are epic battles and a great group of diverse characters and all the history! I loved seeing all the history references and how much different time periods are incorporated into the books! Also...there are dinosaurs and other prehistoric creatures and they are terrifying! . . You can read my full review up on my blog! . . . . . . . #thechosen #thechallenger #contender #taranmatharu #diversebooks #diverseauthors #diversereads #teambkmrk #plottwist #bookishmerch #fantasybooks #yabooks #yareads #yareader #youngadultbooks #youngadultfiction #lovereadingbooks #bibliophilelife #igreads #foreverreading #bookblogger #bookreview #bookrecommendations #diversebookbloggers #historynerd #prettybooks #bookblogging #bookreviewer #dinosaurs #bookishlove
Eid Mubarak! . . Taqabbal Allahu minna wa minkum May Allah accept it from me and you. . . I hope your day is filled with amazing food and presents and lots of virtual parties! . . . . . . . . . #eidmubarak2020 #eidmubarak #ramadan2020 #eidparty #eid2020 #booksandcats #cats #catsofinstagram #caturday #catlife #muslimholiday #diversebooks #readeveryday #handsomecat #prayermat #taqabbalallahuminnawaminkum #yabooks #igbooks #igcats #bookstagram #bookstagrammer #booksofinstagram #catsandbooks #booklover #bookaholic #readersofinstagram #readersofig #readersofinsta #foreverreading #sherlockthecat
Is there a standalone that you would love a sequel for? . . I adored Ayesha at Last by @uzmajalaluddin it was so funny and had some really great Muslim rep. I love how Uzma put a fresh spin on Pride and Prejudice and made it her own too. . . And omg I would love to have a sequel and to know what happens next! . . Also guys did you see yesterday’s post? I am hosting a Daevabad themed photo challenge and giveaway in June! Check out the post for all the details! . . . . . . . . #ayeshaatlast #muslimshelfspace #diversebooks #ramadanreadathon #contemporarybooks #romancebooks #bookishmerch #bookishlove #prideandprejudice #muslimauthors #diverseauthors #diversereads #representationmatters #beautifulbookcovers #bookbloggers #bookboyfriend #otp #ishipit #iwillgodownwiththisship #mrdarcy #elizabethbennet #muslimbooks #muslimrepresentation #booksilove #retelling #weneeddiversebooks #readeveryday #bookishmerch #bookishphotography #bookaholics #bookaddicts
Hello Daevabadis! With the release of The Empire of Gold by @sachakrabooks coming in June me and my fellow Daevabad fans have created a photo challenge to celebrate its release! . The prompts are inspired by all things Daevabad and there will be a giveaway! . . Three winners will be picked and the prizes are: . 🧞 1st prize: The Welcome to Daevabad Bookish Box from @thetsundokuchroniclesetsy . 🧞 2nd prize: A preorder of The Empire of Gold (HB or ebook) . 🧞 3rd prize: A Painted UK PB of The City of Brass from @thetsundokuchroniclesetsy . . To take part: . 🧞 Follow all the hosts @_lostinfantasy_ @flymeawayy @damaged_pages @grottofullofbooks @harrowinghell @unorga.y.nized @leafyjade @thetsundokuchronicles . 🧞 Follow @thetsundokuchroniclesetsy 🧞 Share the photo challenge graphic (this post) in your stories and tag us 🧞 Tag a 2 friends who may also want to take part 🧞 Use #WelcomeToDaevabad so we can find your posts . You don’t need to tag us in your posts. Just use the hashtag . Each day you post a photo inspired by the prompt you get one entry. So that’s a total of 30 chances to enter and to win one of the prizes! . Prizes are open internationally! . . What prompt are you most excited about?! . . . . . #photochallenge #bookstagramchallenge #muslimshelfspace #diversebooks #thecityofbrass #thekingdomofcopper #theempireofgold #daevabadtrilogy #daevabad #sachakraborty #cityofbrass #bookishmerch #bookishlove #bookstagrammers #readmorebooks #diversifybookstagram #diversereads #bookaddicts #bookishlife #lovereadingbooks #muslimauthors #muslimbooks #bookhoarder #readersofinstagram #highfantasy #fantasybooks #weneeddiversebooks #lovetoread #igbooks
What books have you read that are really funny? . . Yes, I’m Hot in This and That Can Be Arranged by @yesimhotinthis are both so hilarious and relatable! I’ve read each book multiple times and they just bring me so much joy to read. . . If you haven’t read them or seen Huda’s hilarious comics on her IG then you really need to go check it out! . . My review for That Can Be Arranged is also up on my blog! . . . . #ramadanreadathon - joy . #songbirdsandsnakes2020 - bookish outfit you want . . . . . . . . #muslimshelfspace #yesimhotinthis #thatcanbearranged #hudafahmy #diversebooks #diversereads #graphicnovels #muslimmemes #muslimauthors #janeausten #favouritebooks #bookishmerch #bookishlove #readmorebooks #contemporarybooks #diversifybookstagram #diverseauthors #bookrecommendations #bookcommunity #bookreviewer #foreverreading #bookobsession #bookishcandles #booksandcamdles #muslimlovestory #readeveryday #readingcommunity #igbookreview